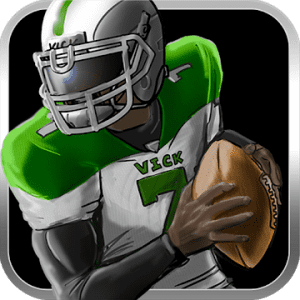 GameTime Football w/ Mike Vick will take up 60M of empty space on your smartphone. App’s success is proven by 1000000+ downloads.

PLAY AS THE FRANCHISE QUARTERBACK! --- We got a situation. Your team is down by 4 with 60 seconds left. The game is on the line and you just got the ball. Are you CLUTCH? It is time to shine! Call the play, make the pass, and march your team down for the game-winning drive!

4-ON-4 FOOTBALL GAME
Designed for the phone, 4-on-4 creates the most immersive, streamlined football experience on mobile.

---NEW, ULTRA-RESPONSIVE PASSING CONTROLS ---
No preset passes! Develop passing skills as you learn to anticipate the throw and lead your receivers. Master your craft with short passes, bullet passes and deep bombs...all to lead your team down the field to glory.

JUKE AND BURN
Spin, Jump, Juke, and Dive with intuitive finger swipe controls. When all else fails, barrel through your opponents with the brutal truck move.

BE A PLAY CALLING GENIUS!
Build a playbook that takes advantage of your player's strengths. Combine the right plays with the right players in this sports game and BOOM, you're the "Greatest Show on Turf"!

BATTLE YOUR WAY THROUGH BRACKETS
Play against opponents starting in the Rookie tournament, and finishing with the Hall of Fame. Can you attain the coveted Legendary status?

ASSEMBLE A TEAM AND TRAIN YOUR PLAYERS
Build your team through free agency acquisitions and train your players to maximize their on-field performance!

MAKE ELECTRIC PLAYS
Extend a play with a QB scramble when no one is open!

LIVE THE LEGEND
Play as the iconic Michael Vick. Make an electric pass or extend the play with his legs!